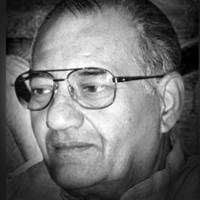 Mushfiq Khwaja is a well-known personality of literature. His original name was Khwaja Abdul Haiee, while his pen name was Mushfiq. He was born on 19 December 1935 in Lahore. After his elementary education, he did his graduation in 1957 and finished his M.A in Urdu from Karachi University in 1958. He had been the Curater of Educational Affairs in Anjuman from 1957 to 1983. He worked as an editor of Qaumi Zaban and Qaamuus-ul-Kutub, the journals of Urdu. Not only was he a poet, but he was also a columnist, critic and research scholar of a high standard. According to him, his personal library had more reference books than any single library of Pakistan. He was always involved in creative ventures. Tazkira-E-Khush Maareka Riba, Volume 1st and 2nd to Saa’dat Khaan Nasir compiled by Mushfiq Khwaja, Ghalib or Safeer Bilgirami, Jaiza-E-Maqtootat-E-Urdu, based on 1248 pages, Khama Bagosh Ke Qalam Se, Sukhan Dar Sukhan, Sukhan Haay Na Guftani, Sukhan Haay Gustarana, Adabi Kalamo Ka Inteqab, Aabiyaat and a compilation of Kulliyat-E-Yagana are the collections of his works. Besides that he wrote approximately fifty features for Radio Pakistan. Taking his literary services into consideration, the Pakistan Government conferred upon him the President’s Medal in 1988. He died on 21 February 2005 in Karachi.