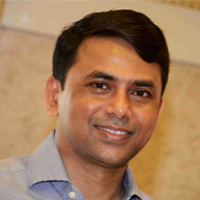 Shri Quaiser Khalid was born in Araria in Bihar. He completed his education from schools in Araria, later admitted to Science College Patna and Patna College Patna. A brilliant student from very beginning, he received a lot of scholarships right from class four till he completed his education. He was selected for the prestigious Indian Police Service examination in the year 1997. He is widely travelled and started his career as a writer in 2005 when he edited and published the poetry collection of famous poet Syed Mohammad Ali Shaad Azimabadi.

Quaiser Khalid is a poet with immense understanding of human relations which has been enriched by his experience as police officer. He questions the established norms and thinks differently. He is among the few poets who have maintained the quality of thought, class of language and originality of perception in poetry in the modern age.